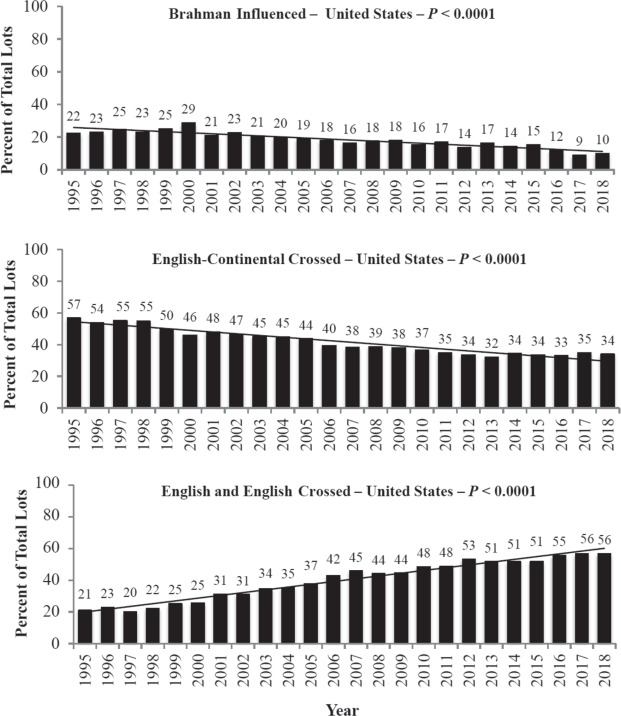 Our overall objective was to characterize potential changes in breed composition of lots of beef calves marketed through video auctions. Specific objectives of the study were to (1) assess trends in percentage of lots marketed with Brahman influence nationally and regionally within the United States and (2) characterize trends in percentage of beef calf lots sired by a single breed.

Data were available on 93,081 lots marketed through 189 summer video auctions from 1995 to 2018. The Cochran-Armitage trend test was used to determine presence of an increasing or decreasing trend, with P ≤ 0.05 considered significant.

Approval for this research by an Institutional Animal Care and Use Committee was not needed given the nature of the records and data used for analyses.
Information describing factors about lots of beef calves marketed through a livestock video auction service (Superior Livestock Auction, Fort Worth, TX) was obtained from the auction service in an electronic format. Data obtained included descriptions of the lots of calves provided by the seller and a representative of the livestock auction service. These data were collected for sale lots of beef calves marketed during summer sales from 1995 through 2018. In all years of the study, the 6 to 8 largest calf sales were used. These sales occurred during the summer months, typically from late May through September. In all years of the study, the summer sales are the consistent data source and represent approximately 69% of the lots marketed during the year. Mixed-sex lots were not included in the database until 2010, so they were excluded from the analysis.
Descriptive information available for each lot of calves included date of the video auction; number of calves; sex of the calves (steers, heifers, or both steers and heifers); the base weight; whether the calves had been weaned before shipment by the current owner; geographical region of the United States where the lot originated; breed description of the calves; frame score of the calves; flesh score of the calves; calf health program used; base weight variation within the lot; whether the calves had horns; whether the calves had been implanted with a growth-promoting implant; whether heifers were Bang’s vaccinated; whether the calves tested bovine viral diarrhea persistently-infected free; whether the lot qualified for a USDA approved Age and Source Verification program; the number of days between the date of the auction and the forecasted delivery date; whether the lot was delivered in an oversized truck load (since 2016); whether the lot qualified for one or more of the video auction service’s programs: Value Added Calf, Certified Natural (since 2004), Certified Natural Plus (since 2014), Non-Hormone Treated Cattle, Superior Progressive Genetics (since 2009), Superior RightSlide (since 2015), 2 Way Slide (since 2016), VitaFerm Raised (since 2016), or GainSmart (since 2017); whether the lot qualified for programs initiated by other groups but only identified by Superior in lot description: Non-Hormone Treated Cattle (since 2008), Verified Natural Beef (since 2010), Global Animal Partnership (since 2014), Reputation Feeder Cattle (since 2015), Top Dollar Angus (since 2015), AngusLink (since 2018), Hereford Advantage (since 2017) or Beef Quality Assurance (since 2018); and the sale price of the lot ($/45.36 kg). Even though data were available on these Superior Livestock Auction and other independent programs, some of the programs had too few lots to be included in the analyses.

Data provided by the livestock auction market included breed description of each lot of calves. Breed composition of each lot was described by the seller working with the livestock auction service representative for each lot of calves. Each lot of calves was categorized into 1 of 3 breed-description groups: (1) Brahman influenced, (2) English–Continental crossed with no Brahman influence, and (3) English and English crossed with no Brahman influence.
Percentage of lots marketed for each of the 3 breed descriptions were analyzed to determine national and regional trends. The United States was divided into 7 regions: West Coast (AK, CA, HI, ID, NV, OR, UT, and WA), Rocky Mountain/North Central (CO, IA, IL, IN, MI, MN, MT, ND, NE, SD, WI, and WY), South Central (AZ, KS, MO, NM, and OK), Texas (TX), Coastal (AL, FL, GA, LA, MS, and SC), Subcoastal (AR, KY, NC, TN, VA, and WV), and Northeast (CT, DE, MA, MD, ME, NH, NJ, NY, OH, PA, RI, and VT). Texas was assigned a separate region because of the large number of lots originating from that state. The Northeast region was excluded from the analysis because few calf lots originated from this region.

Beginning in 2010, the specific breed that sired each lot of beef calves was recorded in the database when provided by the seller. Since 2010, all sales were recorded in the database; thus, in this portion of the analysis, all sales during each year were included. There are numerous sire breeds recorded in the database; however, not all the sire breeds had a sufficient number of lots for a valid statistical analysis. The sire breed of a lot was determined based on lot description information provided by the seller and sales representative. For a lot of beef calves to be included in a sire breed category, all calves in a lot must have been sired by a single breed. Lots of calves sired by multiple breeds were categorized in a separate group from single-breed sires and were not included in this analysis. A minimum of 50 lots of calves were required for a single-sire breed to be included in this analysis. The single-sire breed categories included in this analysis were Angus, Brangus, Charolais, Hereford, Red Angus, and SimAngus. Lots included in the single-sire breed portion of the analysis were marketed from 2010 through 2018.

The Cochran-Armitage trend test was used to determine the presence of an increasing or decreasing trend in percentage of lots of beef calves categorized in a specific breed or sire-breed description, with P ≤ 0.05 considered significant (
SAS Institute Inc, 2019
Cochran-Armitage Trend Test.
2019
https://support.sas.com/documentation/cdl/en/statug/63347/HTML/default/viewer.htm#statug_freq_sect032.htm
). The Cochran-Armitage trend test determines trends in binomial proportions for levels of a single variable (
SAS Institute Inc, 2019
Cochran-Armitage Trend Test.
2019
https://support.sas.com/documentation/cdl/en/statug/63347/HTML/default/viewer.htm#statug_freq_sect032.htm
). Presence of potential trends was assessed nationally as well as within the 6 regions for Brahman-influenced, English–Continental-crossed, and English and English-crossed lots of beef calves. A potential national trend from 2010 through 2018 for the specific single-sire breed categories of Angus, Brangus, Charolais, Red Angus, and SimAngus was investigated.
A multiple-regression model was developed using a backward selection procedure to quantify the effects of factors on the sale price of beef calves (
Kleinbaum et al., 1988
Multiple regression analysis.
in: Pages 102–123 in Applied Regression Analysis and Other Multivariable Methods. 2nd ed. PWS-Kent Publ. Co., Boston, MA1988
). At each step of the backward selection procedure, the variable with the largest nonsignificant P-value was eliminated from the model. The MIXED procedure of SAS (version 9.3, SAS Institute Inc., Cary, NC) was used for the analyses. The model was adjusted for the random effect of auction date nested within auction year. A value of P < 0.05 was required for a fixed effect to remain in the model. To prevent multicollinearity between the linear and quadratic terms (base weight and number of calves), each of these 2 factors was centered at zero by subtracting the overall mean of the factor from the value of that factor for each lot (
King et al., 2006
Effect of certified health programs in the sale price of beef calves marketed through a livestock video auction service from 1995 through 2005..
10.2460/javma.229.9.1389
J. Am. Vet. Med. Assoc. 2006; 229: 1389-1400
).

Breed composition of the US beef cattle industry has changed significantly in the past 50 yr with importation and use of different breeds and selection emphases placed on traits affecting calf growth and carcass value having profound influence. These analyses spanning several years and reflecting beef producers nationally revealed key trends: (1) a national decrease existed in percentage of Brahman-influenced lots marketed from 1995 through 2018 but no change existed in the hot and humid Coastal and Subcoastal regions, to which Brahman-influenced cattle are readily adapted, and (2) the percentage of Angus-sired lots remained the largest single-sire breed group but percentage of these lots decreased from 2010 through 2018, presumably influenced by shifting producer mating decisions on an already predominantly Angus-influenced cowherd. Changes in market signals from packers may drive shifts in the cowherd. Commercial beef producers should consider cowherd breed composition and trait selection decisions comprehensively such that environmental constraints, buyer demands, and resource inputs are appropriately weighted for maximal enterprise profitability.

The authors have not stated any conflicts of interest.