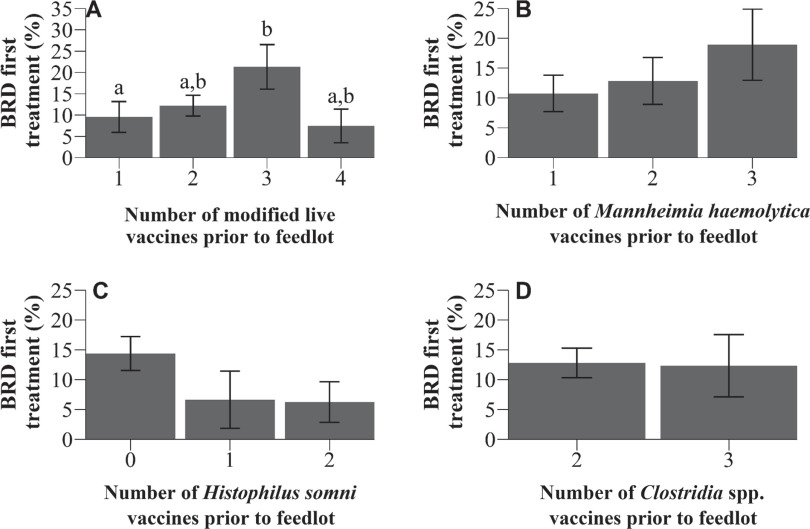 Bovine respiratory disease during the mid-portion of the feeding period: Observations from vaccination history, viral and bacterial prevalence, and rate of gain in feedlot cattle

The objective of this research was to provide preliminary observations related to bovine respiratory disease (BRD) morbidity in high-performing cattle related to cow-calf operations, number of vaccines received before the feedlot, viral and bacterial presence in the nasal cavity during the mid-feeding period, and rate of gain related to incidence of BRD.

Health outcomes were evaluated from 4,346 cattle. Cattle were evaluated by the number of modified-live-viral, Mannheimia haemolytica, Histophilus somni, or Clostridiaspp. vaccines administered before feedlot entry. Individual animal rate of gain was evaluated by incidence of BRD. Nasal swabs were collected from BRD cases and controls to evaluate presence of viruses and bacteria.

First treatment for BRD was associated with the number of times cattle received modified-live-viral vaccines before the feedlot (P = 0.02). Cattle administered a modified-live-viral vaccine 3 times before the feedlot had a greater first treatment for BRD (21.32%) compared with cattle vaccinated 1 time (9.56%; P = 0.06). Cattle that developed BRD had lower (P < 0.01) ADG through the first 30 d on feed compared with clinically healthy cattle. Preliminary nasal swab PCR results show common respiratory viral or bacterial pathogens were not identified in BRD during the mid-feeding period.

There is great variability in BRD morbidity among cow-calf operations. A greater number of vaccinations administered before the feedlot was detrimental to health outcomes. Additional research is needed to further evaluate the entire host, environment, and pathogen triad for development of BRD.

Data used in this experiment were acquired from cooperating feedlots or procedures and were approved by the Veterinary Research and Consulting Services LLC Institutional Animal Care and Use Committee (IACUC number 1005) before study initiation.

Effects of Previous Vaccines at Cow-Calf Operation on BRD

Variation in individual producer vaccination protocols allowed for a retrospective analysis to evaluate the relationship between the number of times vaccines were administered at the cow-calf operation of origin and health outcomes in the feedlot. Individual animal health outcomes from the feedlot were traced back to vaccine programs used on the cow-calf operation of the same 4,346 cattle as described previously. Health outcomes were evaluated by the number of times a modified-live-viral (MLV) vaccine, Mannheimia haemolytica, Histophilus somni, or Clostridiaspp. was administered before feedlot entry. A producer had to provide a minimum of 10 cattle to be included for these analyses. There also had to be at least 2 different producers that administered the number of vaccines for each outcome evaluated. There were a total of 469 cattle from 7 different cow-calf operations that administered an intranasal MLV vaccine, and these intranasal vaccines were counted the same as subcutaneous MLV administration (
Erickson et al., 2020.
A field comparison of heterologous and homologous routes of administration of modified live vaccines for the control of bovine respiratory disease in recently weaned beef calves..
32355354
Can. Vet. J. 2020; 61: 530-533
).
Data were imported into a commercial software program (RStudio Team 2016, Boston, MA). Independent models were performed evaluating the number of MLV, Mannheimia haemolytica, Histophilus somni, or Clostridiaspp. vaccines. First treatment for BRD was evaluated by the number of vaccines administered before feedlot entry and was analyzed using generalized linear mixed statistical models with binomial link function. Days on feed at first treatment for BRD were evaluated by the number of vaccines administered before feedlot entry and were analyzed using general linear mixed models with Gaussian link function. All data are transformed back as arithmetic means. All models included random effects for producer, year, lot, and covariates for average in weight of lot at feedlot arrival and number of days preconditioned. A P-value ≤0.05 was considered statistically significant for main effects of number of vaccinations administered. Pairwise comparisons between the number of times the vaccine was administered before the feedlot were performed when main effect was significant. A P-value ≤0.10 was considered statistically significant for pairwise comparisons after adjusting for multiple comparisons using Tukey methods.

Effects of Rate of Gain on Feedlot BRD

A small-scale, prospective longitudinal study was performed to evaluate the backgrounding program on health performance. A total of 112 Angus, Charolais, Hereford crossbred steers from the Noble Research Institute, with known birth dates and BW, were divided into 2 groups and grazed on grass paddocks and small grain cereal pasture. After completion of their respective grazing periods, steers were transported to a commercial feedyard and followed to slaughter. Individual animal health outcomes were evaluated at the feedlot relative to growth rate, allowing individual animal to serve as the experimental unit.
At weaning, both groups of steers were administered a MLV vaccine containing bovine herpesvirus-1 (BHV-1), bovine viral diarrhea virus (BVDV) types 1 and 2, bovine respiratory syncytial virus (BRSV), and bovine influenza virus (Bovi-Shield Gold 5, Zoetis Animal Health, Parsippany, NJ); an intranasal avirulent live Pasteurella multocida and Mannheimia haemolytica vaccine (Once PMH IN, Merck Animal Health, Whitehouse Station, NJ), albendazole (Valbazen Suspension, Zoetis Animal Health), a Clostridium chauvoei, Clostridium septicum, Clostridium haemolyticum, Clostridium novyi, Clostridium sordellii, and Clostridium perfringens types C and D vaccine (Vision 8 with Spur, Merck Animal Health); Fusobacterium necrophorum bacterin (Fusogard, Elanco Animal Health, Greenfield, IN); and topical permethrin. Steers were revaccinated at 30 d after weaning with a MLV vaccine and Fusobacterium necrophorum bacterin (Ultra Boss, Merck Animal Health). All steers were individually weighed at weaning and revaccination and upon completion of the preconditioning period.
Steers were processed the day following feedlot arrival. During arrival processing, steers were administered a MLV vaccine containing BHV-1 and BVDV types 1 and 2 (Pyramid 3, Boehringer Ingelheim, Duluth, GA), moxidectin (Cydectin, Bayer Animal Health, Shawnee Mission, KS), oxfendazole (Synanthic, Boehringer Ingelheim), and a trenbolone acetate (80 mg)/estradiol (16 mg) growth-promoting implant (Revalor-IS, Merck Animal Health). Steers were individually weighed during arrival processing and at 34 DOF for group 1 and 31 DOF for group 2 to evaluate growth rate in the feedlot.
Individual animal data from both groups were aggregated to evaluate growth rates relative to BRD incidence at the feedlot by visual histograms. Outcomes evaluated included birth weight, weaning weight, feedlot arrival weight, shrink, ADG from birth to weaning, ADG from birth through the preconditioning period, ADG during the preconditioning period, ADG during the first 30 DOF (approximate) in the feedlot, and ADG from birth through the first 30 DOF in the feedlot all related to incidence of BRD. All the ADG calculations at the feedlot were calculated compared with the individual steer BW captured during arrival processing.
Data were imported into a commercial software program (RStudio Team 2016). A linear mixed model was used to evaluate ADG during the first 30 DOF by BRD status for individual animal. The model included random effect for arrival group at the feedlot.

A small, prospective case-control study was performed to evaluate the prevalence of viruses and bacteria in cattle with MFP BRD at a cooperating southwest Kansas feedyard (Hy-Plains Feedyard LLC, Montezuma, KS). When pen riders identified an animal with clinical signs of BRD (n = 4), a clinically healthy calf was pulled from the same pen to serve as a control (n = 4). Inclusion criteria for the case-control study were first treatment for BRD ≥45 DOF and pulled from high-performing lots. High-performing lots were defined as being in the top 25% of cattle fed for ADG and low feed conversion with high-quality carcasses that were >90% prime and choice. Two additional clinically normal cattle from 2 different lots in the feedlot with similar DOF and performance potential, clinically healthy, were selected for healthy cohort comparison. Rectal temperatures were collected from all cases, controls, and healthy cohorts. Anterior nasal swabs were collected using a sterile swab applicator and placed inside the nares to collect nasal mucous as previously described (
Frank and Briggs, 1992.
Colonization of the tonsils of calves with Pasteurella haemolytica..
1586016
Am. J. Vet. Res. 1992; 53: 481-484
;
Frank et al., 2000.
Effects of tilmicosin treatment on Pasteurella haemolytica organisms in nasal secretion specimens of calves with respiratory tract disease..
https://doi.org/10.2460/ajvr.2000.61.525
10803647
Am. J. Vet. Res. 2000; 61: 525-529
). Nasal swabs were collected and submitted for PCR testing for BHV-1, BVDV, BRSV, bovine corona virus, bovine influenza virus, Mannheimia haemolytica, Pasteurella multocida, Mycoplasma bovis, Histophilus somni, and Bibersteinia trehalosi. Cycle threshold values <37 were interpreted as positive for the pathogen, cycle thresholds between 37 and 39 were interpreted as suspect, and cycle threshold values >39 were interpreted as negative for the pathogen. Only descriptive analyses were performed on all nasal swab outcomes.
An additional 22 nasal swabs from a commercial feedyard (feedyard A) and 6 nasal swabs from a second feedyard (feedyard B) were collected from cases of MFP BRD morbidity. Cases from feedyard A were selected from first BRD treatments from 30 to 100 DOF, displayed clinical signs of BRD, and were febrile (≥40°C; 104.0°F). Cases from feedyard B were collected from first BRD treatment at approximately 80 DOF, displayed clinical signs of BRD, and were febrile (≥40°C; 104.0°F). All cases from both feedyard A and feedyard B had no previous respiratory-related treatments at the feedyard. Three to 5 nasal swab samples were pooled and submitted for viral and bacterial (feedyard A) or only viral (feedyard B) PCR testing. Viral PCR was only evaluated in feedyard B to limit diagnostic expense. All pooled PCR results are presented.

There is a large amount of variability in BRD morbidity among cow-calf operations. Increased number of vaccinations administered before the feedlot did not improve health outcomes and was detrimental to health outcomes. Nasal swab results provide preliminary evidence that respiratory viral or bacterial pathogens are not directly involved with BRD cases during the MFP. Additional research is needed to further evaluate the entire host, environment, and pathogen triad for development of BRD in these high-performing cattle.

The study was supported in part by the International Consortium for Antimicrobial Stewardship in Agriculture program through the Foundation for Food and Agriculture Research organization (ICASA18-0000000005; Washington, DC).

The authors declare no conflicts of interest.