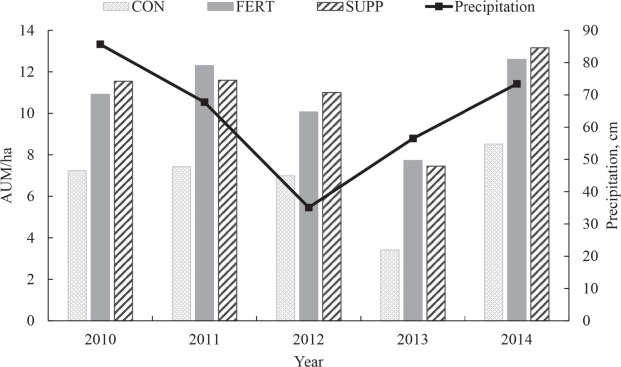 This experiment was conducted to evaluate performance (using 5 yr of data reported here, and the additional 5 yr of results previously) and economic return (10 yr) of steers grazing smooth bromegrass pastures over 10 consecutive years to determine profitability and pasture longevity under 3 management strategies.

Treatments consisted of cattle (n = 450; 45/yr) grazing smooth bromegrass pastures (n = 9/yr) fertilized with 90 kg of N/ha (FERT), unfertilized pastures stocked with cattle that received distillers grains plus solubles (DGS) daily at 0.6% of BW (SUPP), and unfertilized pastures stocked with cattle that received no supplement (control, CON). A randomized complete block design was used each year with 3 treatments present in each of 3 pasture blocks and treatments maintained in the same areas for all 10 yr.

Fluctuating market conditions and changes of input costs affect the overall profitability of treatments and relative differences. In this scenario, holding all prices constant except DGS, price of DGS would have to increase by 20% (increase of $43.29/908 kg) in order for applying N fertilizer to pastures (FERT) or increasing stocking rate (CON) to be more profitable than supplementing cattle with distillers grains (SUPP).

The authors declare no conflicts of interest.