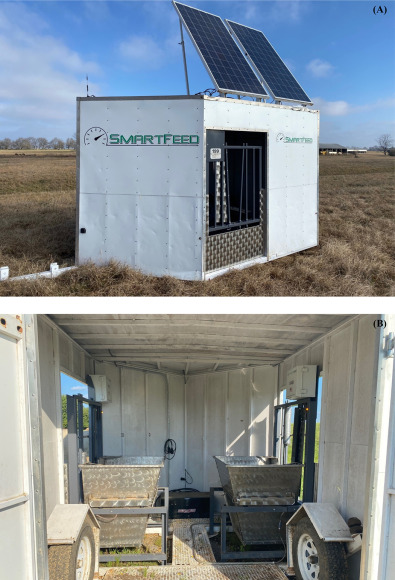 To validate individual animal intake, 30 cows were allowed access to 3 portable units (2 feeding bins per unit) for 6 h. Feed in each bin was removed and weighed in an external scale at the end of each cow visit. To validate total feed disappearance, 75 cows were assigned to 1 of 3 pastures equipped with a portable unit. Feed disappearance over 24 h was assessed manually over 21 consecutive days using an external scale. Ten cows per pasture were randomly selected and identified to facilitate collection of video observational data. Two trained observers recorded animal identification and start and end times for a visit (n = 480 min/d; 3 d).

These results indicate the portable, self-contained feeding units used herein are sufficiently effective for detecting cow presence at a bunk and measurement of feed consumption.

All protocols were approved by the Mississippi State University Institutional Animal Care and Use Committee (#21-023). Each cow was equipped with an electronic ID tag containing a unique passive transponder (High-Performance ISO Half Duplex Electronic ID Tag, Allflex USA) attached to the left ear for individual identification to measure supplement intake and visits to the electronic feeder.

The SmartFeed system was used to deliver supplement and measure intake (Figure 1). The portable self-contained unit features a stainless-steel feed bin (79 × 71 × 86 cm; 2 per unit) suspended on 2 load cells, radio frequency identification (RFID) reader and antenna, adjustable metal framework to limit access to one animal at a time, data acquisition system that records RFID tags, and feed bin weights at 1 Hz. For each visit to the bin, the system recorded the cow RFID, bin number, initial and final times, and beginning and ending mass in the bin. Three units (6 feeding bins) were tested during this study.

To validate feed intake on an individual animal basis, 30 nonlactating, pregnant crossbred cows were confined in a 35 × 10 m drylot pen with access to the 6 feeding bins. Supplement (50% soybean hulls, 50% corn gluten feed) was offered ad libitum in feed bins, whereas trained observers monitored one bin per person beginning immediately after the delivery of fresh feed and continuing for 6 h. The feed in each bin was removed and weighed in an external scale at the end of each visit, resulting in 230 cow visits across 6 feeding bins. The estimated feed consumption by the monitoring system (EO) was then compared with the consumption estimated manually (DO).
To validate total feed disappearance, 75 nonlactating, pregnant crossbred cows were ranked by age and BCS (age = 6.1 ± 0.2 yr; BCS = 5.4 ± 0.05) and assigned to one of three 10-ha pastures (25 cows per pasture) equipped with an electronic feeder for a 21-d observation period. Feeders were placed near established supplement delivery locations, whereas cows were adapted to the system for 7 d before the initiation of data collection and provided with supplement at 0830 h to meet ad libitum intake. Supplement consisted of 50% dried distillers grain and 50% fine mixing salt to limit intake to approximately 0.5 kg/cow daily based on previous research with group-housed, self-fed grazing animals and this electronic feeder (
Reuter et al., 2017.
Technical Note: Daily variation in intake of a salt-limited supplement by grazing steers..
https://doi.org/10.15232/pas.2016-01577
Prof. Anim. Sci. 2017; 33: 372-377
). Feed disappearance over 24 h was assessed manually over 21 consecutive days by removing residual feed from each bunk and using an external scale (DO) and compared with the sum of feed disappearances for each bunk recorded by the monitoring system at each cow visit (EO). Samples from weekly offered and nonconsumed feed were used for moisture analysis as in the study by
Parsons et al., 2020.
Characterization of feeding behavior traits in steers with divergent residual feed intake consuming a high-concentrate diet..
https://doi.org/10.1093/jas/skaa189
J. Anim. Sci. 2020; 98
.
For video data collection, 10 cows per pasture were randomly selected and individually identified using an adhesive marker (Estrotec) before the initiation of video recordings. To facilitate collection of observational data, cows were evaluated on 3 consecutive days for 8 h on d 10 through 12. Video surveillance cameras (JVC Everio S GZ-MS120; Americas Corp.) were positioned approximately 0.5 m above feed bins in each unit and had the capability to store output internally for up to 15 h. Cameras were retrieved in the evening and replaced each morning during observation periods. Internal clocks on the video cameras and the data acquisition system were synchronized at the onset of the experiment. Two trained observers independently recorded animal identification number, bin number, and the start and end times for each bunk visit. The start and end times for a bunk-visit event were recorded once an animal had completely passed its RFID through the metal framework of the portable unit and was above the feeding surface of the bin. There was no attempt to quantify the orientation of animal’s head during a bunk-visit event (Figure 2). Raw data were summarized for each minute of the day (n = 480/d), recording cow presence (1) or absence (0) at the feed bin as determined by the SmartFeed system (EO) and video (DO).

Collectively, results indicate the described system is a useful tool to provide reasonable estimates of supplement intake of pasture-based, group-housed cattle. Capturing individual animal intake data with this technology provides the ability to further examine the influence of supplemental feeding on a per-animal basis while the cattle remain in a realistic production setting. Facilities using the system should be aware of factors that may influence eating patterns from the unit including topography, size and type of cattle, and stocking rate.

Financial support for this research was provided by Zinpro Corporation (Eden Prairie, MN). Appreciation is expressed to Robert Dobbs, Douglas Shaw, and Hunter McCool (Prairie Research Unit, Mississippi State University) for their assistance during this study.

One of the authors contributed to research design and data interpretation and is employed by Zinpro Corporation, which provided funding for this work. The other authors have not declared any conflicts of interest.