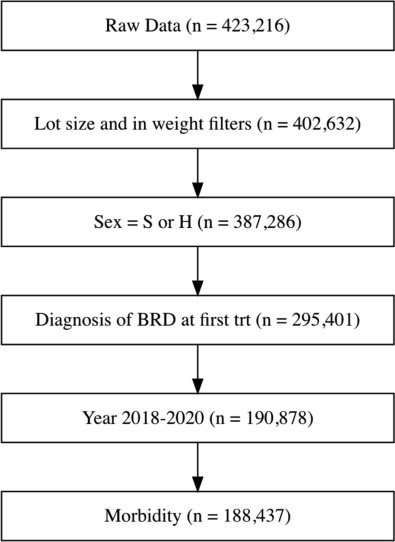 Individual animal records for first BRD treatment (n = 188,437) or BRD mortality (n = 13,991) were classified as early stage, middle stage, or late stage based on the percentage of their cohorts’ feeding phase that was complete at day of event (event days on feed/cohort total days on feed).

There were 141,097 early stage, 33,871 middle stage, and 13,469 late stage at first treatments for BRD and 7,821 early stage, 3,625 middle stage, and 2,545 late stage at death. Two ordinal logistic regression models (morbidity, mortality) were used to evaluate the association of cattle demographic factors (arrival weight, arrival lot size, sex, metaphylaxis, quarter of arrival) and the probability of an individual animal first treatment for BRD or mortality from BRD being early, middle, or late stage. All 2-way interactions of cattle demographics for morbidity were significant (P < 0.05), whereas for mortality, main effects of arrival weight and metaphylaxis were significant (P < 0.05) and only the 2-way interactions of sex by quarter of arrival and sex by lot size were significant (P < 0.05).

In general, heifers, heavier animals at arrival, and cattle that arrived at the yard in the first and second quarter were the most likely demographic categories to have an initial diagnosis of BRD in the mid or late stage of the feeding phase.

Individual animal treatment records from 25 US feedlots were collected under confidentiality agreements with individual yards. Institutional Animal Care and Use Committee (IACUC) approval was not required as historical operational data were used for the analysis. All individual animal records were assigned a unique identifier based on animal tag, yard identifier, and cohort identifier. Using the unique identifier, data were filtered to one row per treatment date per animal.

Treatment records for a total of 423,216 individual animals were initially collected from collaborating feedlots. For this analysis, only cattle with first treatment records of BRD were included. Data were filtered to include only records where the cohort size at arrival was between 20 and 400 cattle. Arrival weight was averaged over cohorts, and criterion for inclusion was 227.3 to 454.5 kg. Total cohort DOF was limited to 250 d or fewer. Data were filtered to include only records from January 4, 2018, to December 28, 2020, as only 2 feedlots provided data generated before 2018. Data were filtered to include only first pull records for treatment of BRD for each individual animal (Figure 1).
A cohort was considered to have received metaphylaxis if over half the cohort received an antimicrobial labeled for control of BRD during arrival processing into the feedlot. Continuous explanatory variables were categorized to avoid violating the linearity assumption. A variable was created for quarter of arrival based on cohort arrival date (quarter 1, January to March; quarter 2, April to June; quarter 3, July to September; quarter 4, October to December). A variable was created by calculating the percentage of total feeding days that had passed when the animal had their first pull [(DOF at treatment/cohort total DOF) × 100]. Cattle were categorized as early-stage, middle-stage, or late-stage morbidity based on the percentage of the feeding phase they were in when they had their first treatment for BRD. Early stage (EARLY) was considered 0 to 33.3% of the feeding phase, middle stage (MID) was 33.3 to 66.6%, and late stage (LATE) was 66.6 to 100% of the feeding phase completed at the time of treatment.

After applying the same constraints for cohort size, DOF, date, and arrival weight as listed previously, there were 51,688 death records in the data (Figure 2). These data are from the same data set as the treatment records, and an animal did not have to be treated for BRD before dying with a diagnosis of BRD to be included. Diagnosis was determined by feedlot personnel. A variable was created with categories for the percentage of the feeding period when the death occurred as [(DOF at death/cohort total DOF) × 100]. Cattle were categorized as EARLY for 0 to 33.3%, MID for 33.3 to 66.6%, or LATE for 66.6 to 100% of the feeding phase completed at the time of death.

Two ordinal regression mixed-effects models were fit using the ‘clmm’ function from the ‘ordinal’ package in R (https://CRAN.R-project.org/package=ordinal) to analyze individual animal risk factors associated with the timing of BRD morbidity and BRD mortality. The dependent variable was time of morbidity or mortality as categorized by the percentage of feeding phase complete. Independent variables evaluated in the model were cohort sex, quarter of arrival to the feedlot, cohort size at arrival, average in weight of the cohort at arrival, metaphylaxis, and any 2-way interactions between these variables. Continuous variables, such as weight at arrival, and cohort size at arrival were categorized into bins to avoid violating the linearity assumption. Backward elimination was used to select the variables to remain in the final model for the 2-way interactions. Values of P < 0.05 were considered significant. Random effects were included in the model for cohort nested within yard, and year, to account for the hierarchical structure of the data as well as cohort total DOF to account for differing days at risk among groups.

The study objective was to identify risk factors associated with BRD morbidity and mortality timing within the feeding phase. Understanding risk factors associated with the timing of onset of BRD may lead to management practices to reduce late-feeding-phase morbidity and mortality. The structure of our data allowed us to perform analysis on multiple risk factors theorized to effect morbidity and mortality timing in cattle. Most previous BRD research focused on severity of disease and demographic risk factors that may increase BRD risk; however, this analysis evaluated risk factors potentially influencing BRD timing. Disease later in the feeding phase is important to producers as it costs more to treat heavier animals and a death late in the feeding phase is more costly due to greater resources allocated. Babcock found 7 temporal patterns of disease at the cohort level; in this analysis we only looked at 3 timings, which were at the individual animal level (
Babcock et al., 2010.
Temporal distributions of respiratory disease events within cohorts of feedlot cattle and associations with cattle health and performance indices..
https://doi.org/10.1016/j.prevetmed.2010.09.003
20947196
Prev. Vet. Med. 2010; 97: 198-219
). Both analyses found that most cattle that are treated at the feedlot are treated early in their feeding phase, but that is modified by multiple other factors. Although the Babcock article identified different timing curves, the analysis was not intended to identify different risk factors, in contrast to this article.

Limitations from the study include that this information only pertains directly to feedlots in the region of those analyzed and from similar management styles. Many feedlots in the United States face similar problems overall, but there are regional differences such as weather, climate, processing protocols, and management that limit the appropriateness of extrapolation. Retrospective observational studies have some limitations, especially when combining data from multiple locations; each feedlot has differences in management as well as different personnel identifying disease in animals and performing the necropsies and classifying disease diagnosis. Across the feedlot industry, nationwide surveys have been used to estimate the number of animals that undergo postmortem examination; in 2011 this number was approximately 48.7% (SE, 2.6%;
NAHMS, 2022

). When necropsy was not performed, there is the possibility of misdiagnosis, which expands to more diseases than just acute interstitial pneumonia (AIP), also digestive, and heart failure. As the third and fourth quarters of the year are historically the worst for disease, personnel at feedlots are likely more attentive and apt to treat animals in an attempt to stop disease early. This leads to some potential confounding due to human nature. Some confounding factors were accounted for as covariates in the model; however, some known risk factors for BRD such as cattle source, weather, and distance traveled were not available for this analysis. This was an exploratory study, and the findings should be considered as hypotheses for further research.
Steers were more likely to be EARLY for morbidity than heifers across all quarters of arrival, and they were also more likely to die from BRD early than heifers across most quarters of arrival. There was not a significant difference during the second quarter of arrival for mortality between heifers and steers. Taylor et al. found an association between buller steers in their first 30 DOF and BRD mortality, which could explain some of why there is a greater probability of BRD mortality early in the feeding phase for steers (
Taylor et al., 1997.
Sickness, mortality and the buller steer syndrome in a western Canadian feedlot..
https://doi.org/10.1111/j.1751-0813.1997.tb12257.x
9406632
Aust. Vet. J. 1997; 75: 732-736
). This was a retrospective analysis, and there is the possibility that some BRD mortalities were misdiagnosed and actually were AIP deaths. A study identifying risk factors for AIP found that heifers were at a 4.9-times greater risk of suffering AIP than steers (
Loneragan et al., 2001.
Association of 3-methyleneindolenine, a toxic metabolite of 3-methylindole, with acute interstitial pneumonia in feedlot cattle..
https://doi.org/10.2460/ajvr.2001.62.1525
11592314
Am. J. Vet. Res. 2001; 62 (b): 1525-1530
). Loneragan noted in the same study that summer months and heavier animals had an increased risk of AIP.
Timing of disease was modified by lot size at arrival as animals that arrived in smaller cohorts were more likely to be EARLY when modified by quarter of arrival or arrival weight. Lot size at arrival could be a proxy for other risk factors that were not evaluated in this study (distance traveled, management structure within the feedlot, cattle source, and so on). A previous study had discovered an increased BRD incidence in medium and large lot sizes; our study did not look at the overall incidence but the timing of disease onset (
Cernicchiaro et al., 2012.
Associations between weather conditions during the first 45 days after feedlot arrival and daily respiratory disease risks in autumn-placed feeder cattle in the United States..
https://doi.org/10.2527/jas.2011-4657
22147486
J. Anim. Sci. 2012; 90: 1328-1337
). In this present study there was an increased probability of mortality from BRD EARLY among heifers of small lot sizes compared with heifers of lot sizes with more than 100 animals at arrival, but there was no difference among steers of any lot size at arrival across timing.

This work was funded by the International Consortium for Antimicrobial Stewardship in Agriculture program through the Foundation for Food and Agriculture Research organization (ICASA; Washington, DC).