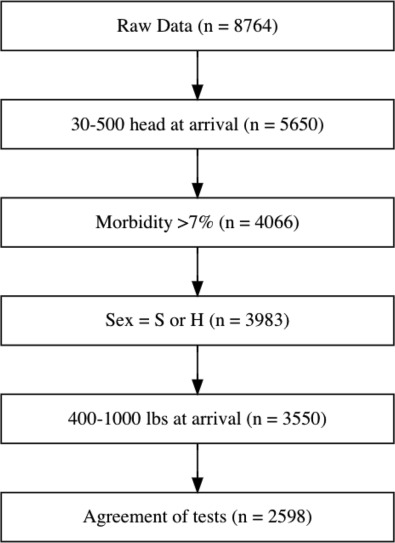 Previous bovine respiratory disease (BRD) research has focused on events early in the feeding phase, but the objective of this study was to determine characteristics and risk factors associated with cohort-level BRD morbidity in the middle and late portions of the feeding phase.

The analysis was performed on records from 13 commercial feedlots in the United States from 2017 through 2020. Cohorts were analyzed over their first 100 d on feed. Two methods of classification were used. In the veterinarian classification method, hierarchical clustering created 20 temporal patterns, which were categorized by veterinary consultants as early-feeding-stage, mid-feeding-stage, or late-feeding-stage morbidity curves. In the days classification method, cohorts were categorized based on which portion of the feeding period (0 to 42 d, 43 to 71 d, or 72 to 100 d) had the greatest percentage of treatments for BRD. An events/trials model was used to determine morbidity and mortality across different stages of the feeding phase. Ordinal regression was used to determine associations between cohort characteristics and BRD timing. Year and feedlot were included as random effects to account for the hierarchical structure of the data.

This study evaluated risk factor relationships with cohort-level BRD timing. No cattle characteristics were significantly associated with BRD timing; however, cattle arriving in Q2 were at higher risk for cohort-level mid- or late-feeding-stage BRD.

Lot-level data from 13 feedlots were collected under confidentiality agreement with the individual feedlots. Institutional Animal Care and Use Committee (IACUC) approval was not required as historical operational data were used for the analysis. The Institutional Review Board at Kansas State University, application #10348, was deemed exempt from in-depth review and granted permission for use of a survey. All veterinarians that participated in the survey did so anonymously.
A “cohort” was defined to be a group of animals that arrived at the feedlot together; they did not have to finish out the entire time on feed in the same pen. Data were imported into RStudio (9) for analysis; there were 8,764 cohorts, each cohort containing at least one record for an animal treated for BRD. Records were from May 25, 2017, through June 17, 2020. Our case definition for “BRD” was any animal identified by feedlot personnel with clinical signs consistent with BRD for the first time in the feeding period and subsequently treated with an antimicrobial by feedlot personnel. Animals were not excluded due to multiple treatments; however, only the first pull was considered for this analysis. Cohorts were limited to 30 and 500 animals at arrival, greater than 7% total BRD morbidity, single-sex cohorts, and an average arrival weight between 181 kg (400 lb) and 454 kg (1,000 lb). There were 3,550 cohorts that met these initial criteria (Figure 1).
Data were transformed into a format in which every cohort had an observation for each individual day from 0 to 100, creating a data set for number of animals treated for BRD each day. This was done to create equal weight in the temporal patterns for each cohort as animals were fed to many different final days. Variables were calculated for the cumulative treatments out of the total treatments per cohort and of the treatments in a lot out of the total animals in that lot. Continuous variables were categorized based on biological cutoffs or quarters to avoid violating the linearity assumption (Table 1).
Table 1Variables used in the working data set
There is no previously published case definition of early-feeding-stage, mid-feeding-stage, and late-feeding-stage timing for cohort BRD morbidity; therefore, we decided to combine 2 categorization methods to classify the timing of BRD, the first of which used hierarchical clustering based on cumulative BRD morbidity to create daily incidence curves and asking consultant veterinarians to classify each curve as having a pattern consistent with early-feeding-stage, mid-feeding-stage, or late-feeding-stage BRD. The second approach was to categorize cohorts based on which feeding period (early-feeding stage, mid-feeding stage, or late-feeding stage) had the greatest percentage of BRD morbidity. Combining 2 classification methods was done to increase specificity of our case definition so that any cohort classified as having late-feeding-stage BRD would likely receive that classification by a strong majority of feedlot veterinarians.

In the first classification, clusters of BRD incidence curves were created using Ward’s method, which is an agglomerative clustering technique that minimizes sum-of-squares (
Ward, 1963.
Hierarchical grouping to optimize an objective function..
https://doi.org/10.1080/01621459.1963.10500845
J. Am. Stat. Assoc. 1963; 58: 236-244
). Agglomerative clustering is a type of clustering that starts with each individual observation and works forward grouping them to a specified cut point. Twenty clusters were formed using a process where a cut point was chosen when an adequate number of cohorts remained in each cluster and merging groups one more time showed an evident loss of information. Each cluster represented at least 46 cohorts, and clusters were graphed as percentage of treatments per day for visualization. The percentage of treatments per day curves for each of the 20 clusters were built into a survey on Qualtrics (2005; www.qualtrics.com), which was sent out as a convenience sample of consulting veterinarians. The survey asked each veterinarian to classify each plot as depicting early-feeding-stage, mid-feeding-stage, or late-feeding-stage cohort-level BRD morbidity timing (Figures 2, 3, and 4).

In the second classification, method cohorts were categorized based on which feeding period had the greatest percentage of BRD cases. Feeding intervals were set as d 0 to 42, 43 to 71, and 72 to 100. Previous literature has stated that 75% of BRD morbidity occurs by d 42 on feed (
Babcock et al., 2010.
Temporal distributions of respiratory disease events within cohorts of feedlot cattle and associations with cattle health and performance indices..
https://doi.org/10.1016/j.prevetmed.2010.09.003
20947196
Prev. Vet. Med. 2010; 97: 198-219
), and for our purposes, this was defined as early-feeding stage. The mid-feeding-stage and late-feeding-stage categories were decided on by allotting half the remaining DOF to each category. Percentage of overall BRD morbidity within cohort was calculated for each interval, and whichever interval had the greatest number of treatments was assigned the classification. Agreement of classification methods was used to create a data set of cohorts that met our final case definition for the timing of cohort-level BRD morbidity.

An events-over-trials regression mixed-effects model was fit using the ‘glmer’ function from the ‘lme4’ package in RStudio (
RStudio Team, n.d.

). The outcome variable was the number of treatments or population at risk within cohort. “Population at risk” was defined by number of cattle in the cohort at arrival less number treated per day as defined previously (
Cernicchiaro et al., 2012.
Associations between weather conditions during the first 45 days after feedlot arrival and daily respiratory disease risks in autumn-placed feeder cattle in the United States..
https://doi.org/10.2527/jas.2011-4657
22147486
J. Anim. Sci. 2012; 90: 1328-1337
). The independent variable for this analysis was the ordinal variable “time,” which had categories for early-feeding stage, mid-feeding stage, or late-feeding stage. Feedlot and year were included as random effects to account for the hierarchical nature of the data. A similar model was fit to identify differences in mortality for the independent variable “time” with random effects for feedlot and year. This model used outcome variable deaths(events)/population at risk (trials), with “population at risk” defined as number of cattle in the cohort at arrival less the number dead by day. The logistic regression model was fit to evaluate differences in morbidity and mortality across cohorts that were classified as early-feeding stage, mid-feeding stage, or late-feeding stage.
An ordinal regression mixed-effects model was fit using the ‘clmm’ function from the ‘ordinal’ package in RStudio (
RStudio Team, n.d.

) to analyze which cohort-level risk factors were associated with the outcome of interest (early-feeding-stage, mid-feeding-stage, or late-feeding-stage cohort BRD timing). Covariates evaluated for the model were sex, arrival quarter, in-weight category, lot size category at arrival, and all possible interactions. Random effects of feedlot and year were included to account for lack of independence of the feedlots and years. All potential interactions were evaluated using forward manual selection. Main effects variables were screened by backward elimination until only statistically significant (P < 0.05) variables remained for the final model. Probabilities were used to evaluate the predictor variable.

Previous literature evaluated factors related to BRD at arrival and within the early weeks in the feedlot. Bovine respiratory disease morbidity is most predominant within the first 30 d for feedlot cattle in Brazil (
Baptista et al., 2017.
Bovine respiratory disease complex associated mortality and morbidity rates in feedlot cattle from southeastern Brazil..
https://doi.org/10.3855/jidc.9296
31600152
J. Infect. Dev. Ctries. 2017; 11: 791-799
), and a US study found that 74% of BRD cases occurred within the first 42 DOF (
Babcock et al., 2009.
Feedlot health and performance effects associated with the timing of respiratory disease treatment..
https://doi.org/10.2527/jas.2008-1201
18765846
J. Anim. Sci. 2009; 87: 314-327
). Although a study recently investigated BRD at ≥45 DOF (
Theurer et al., 2021.
Bovine respiratory disease during the mid-portion of the feeding period: Observations of frequency, timing, and population from the field..
https://doi.org/10.15232/aas.2020-02089
Appl. Anim. Sci. 2021; 37: 52-58
), the current study helps fill in the gap of research specifically addressing factors associated with timing of disease through the first 100 DOF. Previously, there was no case definition of late-day cohort-level morbidity and no previous methodology to assign cohorts to a timing of disease category. Our case definition for cohort-level BRD timing was created based on agreement between a classification method that surveyed consultants to classify clusters of BRD incidence curves and classification based on which of 3 feeding periods had the greatest percentage of BRD cases for each cohort.

Classifying Cohorts Based on the Timing of BRD Morbidity

NAHMS (National Animal Health Monitoring System). 2011. Health and Health Management on U.S. Feedlots with a Capacity of 1,000 or More Head. Accessed May 12, 2021. https://www.aphis.usda.gov/animal_health/nahms/feedlot/downloads/feedlot2011/Feed11_dr_PartIV_1.pdf.

). Additionally, there was an imbalance of cohorts in the timing categories, with the fewest cohorts being considered late. Due to the total number of cohorts involved in this study and statistical tests used, this is not of major concern but should be noted as potential associations could have been missed because of the smaller number of cohorts. In addition, interpretation of observational studies of feedlot data must recognize that different personnel are identifying sick calves with different diagnostic protocols in place at each feedlot. Potential confounding factors need to be considered when interpreting the results of this study; some examples of this would be differences in management between feedlots, biological differences between animals, background, and previous management of animals. Our analysis was done to account for sources of variability that we know have an effect on our outcome by including feedlot and year as random effects in the model.

Evaluating the timing of BRD morbidity in the feedlot illustrated a significance of the quarter of arrival, with the greatest amount of late-feeding-stage BRD occurring in cattle that arrived between April and June. Further investigation into why animals arriving in the second quarter of the year have greater risk for late-feeding-stage BRD morbidity needs to be done. Our data represented 13 feedlots from the central United States, so caution needs to be taken when interpreting these results to feedlots in other geographic locations and with other management practices.

The authors thank the International Consortium for Antimicrobial Stewardship in Agriculture Program through the Foundation for Food and Agriculture Research Organization (ICASA; Washington, DC) for funding this work.