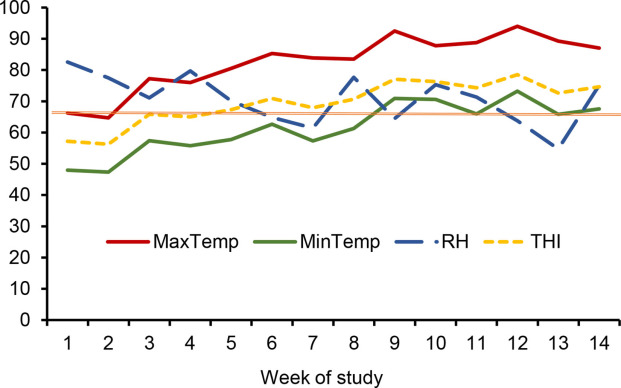 Digestive disorders can be a significant cause of disease in dairies and are frustrating because of their unpredictability. There is limited research on these conditions, and experimental exposure to individual risk factors often fails to cause disease. In this case study, we document the outbreak and resolution of digestive disorders among 15 control cows enrolled in a larger study.

By wk 4 to 5 of the study, fecal consistency decreased and milk fat content had dropped from 3.7% (┬▒0.20) to 3.4% (┬▒0.20), on average. Coincident with the onset of environmental heat stress, 3 cows developed severe digestive disorders, resulting in a displaced abomasum in one cow. At that point, the diet was changed to replace some corn silage with wheat straw, a direct-fed microbial was added to the diet, and organic acid treatment of the silage face was initiated. Within a month after these changes were implemented, essentially all signs of digestive problems resolved, including milk fat content, fecal consistency, and blood plasma concentrations of haptoglobin and d-lactate, although milk yield decreased.

This case study points to multiple factors that likely combined to lead to microbial and gastrointestinal disruptions resulting in clinical disease in a subset of cows.

All protocols were approved by the Kansas State University Animal Care and Use Committee. Fifteen multiparous (10 in lactation 2 and 5 in lactation 3+) Holstein dairy cows (94ŌĆō197 DIM) were control animals included in a larger production study carried out between April 30 and August 5, 2019. Cows were housed at the Kansas State University Dairy Teaching and Research Center (Manhattan, KS) in tie-stalls with rubber mats and wood shavings. A TMR (Table 1) was prepared once daily, with feed delivered to cows twice daily (0630 and 1830 h); the TMR consisted of corn silage, alfalfa hay, corn byproduct (Sweet Bran, Cargill), whole cottonseed, and a grain mix. Kansas experienced drought conditions during the summer of 2018, which resulted in the corn silage having low starch content and greater-than-normal NDF digestibility (Table 2). The low energy content of silage required greater concentrate levels to meet predicted energy requirements for highly productive mid-lactation cows. Feed and feed-refusal samples were collected 3 times per week, composites representing 2-wk periods, and sent to Cumberland Valley Analytical Services for chemical composition analysis. Dry matter intake was determined by recording daily feed intake and factoring in TMR DM content, updated weekly.
Table 1Ingredient and chemical composition of TMR (% of DM except where noted)
1 Sweet Bran, Cargill.
2 Soy Plus, Landus Cooperative.
3 Essentiom, Arm & Hammer Animal Nutrition.
4 Biofix Plus Pro, Biomin America.
5 aNDF = NDF after amylase treatment.
Table 2Chemical composition of corn silage sources (% DM basis except where noted)
1 aNDF = NDF after amylase treatment.
Cows were milked 3 times daily at 0400, 1100, and 1800 h. Milk yield was recorded electronically at each milking. Milk samples were collected for 6 consecutive milkings each week and sent to the Miner Institute for analysis of fat, true protein, lactose (B-2000 Infrared Analyzer; Bentley Instruments), and fatty acid class by Fourier-transform mid-infrared spectroscopy (Delta Combi 300). After analysis, data were composited by week. Energy-corrected milk yield was calculated as (0.327 ├Ś milk yield) + (12.95 ├Ś fat yield) + (7.65 ├Ś protein yield) and feed efficiency was calculated as ECM/DMI.
Blood samples were collected from the coccygeal vein once every other week at 1500 h into 2 evacuated 10-mL tubes containing potassium EDTA (Vacutainer; Becton, Dickinson and Co.). Blood was put on ice immediately after collection and then centrifuged at 2,415 ├Ś g (Beckman J06B Centrifuge) for 15 min. Plasma was collected and stored at ŌłÆ20┬░C for later analysis. Plasma was analyzed for haptoglobin (
Cooke and Arthington, 2012.
Concentrations of haptoglobin in bovine plasma determined by ELISA or a colorimetric method based on peroxidase activity..
https://doi.org/10.1111/j.1439-0396.2012.01298.x
22487219
J. Anim. Physiol. Anim. Nutr. (Berl.). 2012; 97: 531-536
), d-lactate (Colorimetric Assay Kit; Biovision Inc.), serum amyloid A (SAA; ELISA Assay kit; Tridelta Development Ltd.), lipopolysaccharide binding protein (LBP; ELISA Assay Kit; Cell Sciences Inc.;
Bannerman et al., 2003.
Increased levels of LPS-binding protein in bovine blood and milk following bacterial lipopolysaccharide challenge..
https://doi.org/10.3168/jds.S0022-0302(03)73914-9
14594231
J. Dairy Sci. 2003; 86: 3128-3137
), and diamine oxidase (DAO; Biovision Inc.).
Over the course of the study, 5 of the 15 cows were removed from the study for health concerns. Some loose manure was noted relatively early in the study, particularly from wk 4 on; however, for most cows and most days, manure consistency was within the normal range.
The first cow to be removed from study was in her fourth lactation and developed hock inflammation in wk 4. The next 3 cows were removed from the study for digestive disorders. During wk 5, the first serious summer heat stress window occurred, with mean weekly environmental temperature-humidity index (THI) climbing past 70 (Figure 1). At the end of wk 5, a second-lactation cow suddenly (within 24 h) went off feed and had a sharp decrease in milk production (from a mean of 38 kg/d down to 19.5 kg/d). Physical examination revealed extremely high rumen motility, but her body temperature and water intake were normal. Within 48 h, she was diagnosed with a displaced abomasum. In wk 7, 2 more second-lactation cows were removed from the study within 48 h of each other, after 4 d of declining feed intake. Digestive tract abnormalities (high motility, loose manure) were again observed, and one of these cows also showed some apparent neurological problems.
At this point in the study (wk 7), composite samples (representing 2-wk periods) collected in the initial 6 wk of the study were sent for initial mycotoxin analysis (Romer Labs Inc.; LC-MS), and the diet was adjusted to partially replace some excessively dry corn silage (corn silage A) with another corn silage (corn silage B) and some straw to enhance physically effective fiber content of the diet. Furthermore, we began treating the approximately 5.8 m2 of silage faces with 2 L/d of organic acids (0.34 L/m2 per d; Ultra-Curb, Kemin) to limit mold growth at feed-out and added a direct-fed microbial (Biofix Plus Pro; Biomin America) to the grain mix at 0.10% of the ration (DM basis) with the intention of limiting mycotoxin bioavailability. All of these changes were in place by the end of wk 8. One additional cow (third lactation) was removed from study during wk 13 due to clinical mastitis. Although we no longer sampled cows that were removed from the study, all cows recovered and remained in the herd. Twice during the study (wk 9 and 14), feed and fecal samples were collected to enumerate viable clostridia bacteria and those from the species C. perfringens specifically.
To assess what response variables might have changed in a manner that coincided with the observed health problem, we assessed whether variables deviated from the baseline (wk 1) observations over time. Time series data were analyzed using SAS 9.4 (SAS Institute Inc.). Data were modeled with the Mixed Procedure using week, parity group (2 vs. 3+), and week ├Ś parity group interaction as fixed effects with cow as a random effect. Repeated measures over time were modeled with a heterogeneous autoregression covariance structure. Conditional Studentized residuals were used to check for normality and to remove outliers (>4 or <ŌłÆ4). Significant effects were declared at P Ōēż 0.05 and tendencies at 0.05 < P Ōēż 0.10. All data are expressed as LSM and SEM. Differences between wk 1 and subsequent weeks were evaluated by the pdiff option of the Mixed Procedure when the overall effect of week was significant.

Few publications have reported temporal responses of lactating dairy cows through a spontaneous gastrointestinal health challenge. We found that intestinal disease coincided with increased plasma concentrations of the acute-phase protein haptoglobin as well as the microbial metabolite d-lactate, whereas the enterocyte-derived enzyme diamine oxidase was decreased in plasma. We further observed decreased secretion of preformed fatty acids in milk and reduced feed efficiency. A combination of suboptimal diet quality issues (mycotoxins, pathogen load, and limited physically effective fiber), compounded with seasonal heat stress, likely encouraged growth of opportunistic pathogens in the hindgut and altered gastrointestinal function. We hope that these observations can inform the development of testable hypotheses that may lead to a more robust understanding of how stacked stressors promote gastrointestinal disease.

The authors thank Trouw Nutrition (Amersfoort, the Netherlands) for partial funding of this research.